Rubber is one of the most widely used and relied upon materials in human society today.

Whether it’s the tires on your car, the flooring at your local gym, or the marigold gloves hanging up in your kitchen, rubber is a part of our everyday lives in the modern world.

Because rubber is present in so many areas of modern living, it’s important to understand how this material interacts with the environment around it.

One of the most frequently asked questions about rubber is: is it flammable? The answer to this question has important safety implications, and knowing this information could be the difference between life and death.

So, without further ado, let’s explore the flammability of rubber!

What Exactly Is Rubber?

Before we jump into discerning whether or not rubber can be considered a flammable material, it’s worth laying the foundation of what rubber actually is.

Rubber has many names, including India rubber, caoutchouc, latex, and Amazonian rubber.

Simply put, natural rubber is a polymer (a material made of macromolecules) that consists mainly of isoprene (an organic compound) and impurities from different organic compounds.

Rubber can also be synthetic, in which case it is mass-produced and made from a variety of petroleum-based monomers.

What Does ‘Flammable’ Mean?

It’s also important to get clear on what exactly we mean when we say that a material is flammable.

Generally speaking, a flammable material is one that can be set alight with relative ease. But this is quite a vague definition because what constitutes ‘ease’ can be subjective.

Specifically, for a material to be labeled as flammable, it must have a low flashpoint. A material’s flashpoint refers to the lowest temperature at which it can ignite when exposed to flame.

The threshold for a material to be officially classified as flammable is a flashpoint below 100.04 degrees Fahrenheit (37.8 degrees Celsius).

Materials with flashpoints above this threshold, but below 199.94 degrees Fahrenheit (93.3 degrees Celsius) are considered combustible. 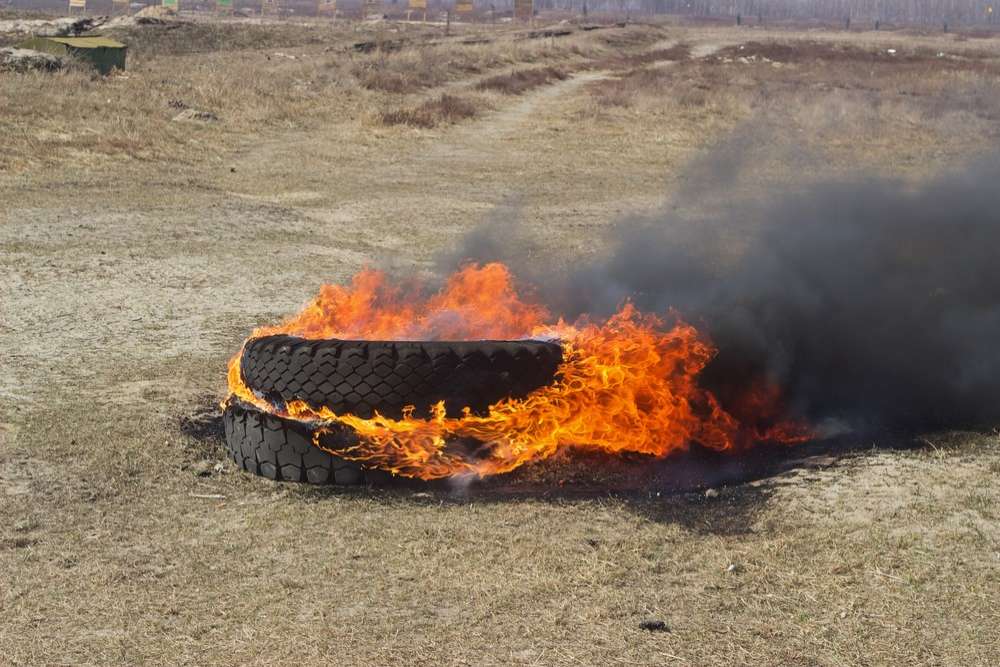 So, bearing all of the above information in mind, is rubber flammable?

Technically speaking, no, rubber is not a flammable material. That’s because most types of rubber have a flashpoint (ignition temperature) of between 500 and 600 degrees Fahrenheit, which translates to 260 to 316 degrees Celsius.

This is largely true of both natural and synthetic rubber: one type is not significantly more or less difficult to light on fire than the other.

Clearly, based on these numbers, the flashpoint of rubber is well outside of the threshold for what is considered flammable by fire authorities.

The reason why rubber is not typically flammable is that it simply does not conduct heat very well, which makes it difficult to ignite.

Another reason is that many items made of rubber are quite thick (think car tires), which makes it difficult for flames to take hold of the material.

However, this information is by no means a reason to be careless with rubber materials around an open flame. Why? Because once rubber does start to burn, it’s incredibly difficult to extinguish, and the byproducts of burning rubber can be extremely dangerous.

Why Is Burning Rubber So Dangerous?

There are several very good reasons why you should never try to set rubber on fire for any purpose.

For one thing, if you thought getting rubber to catch on fire was difficult, extinguishing it is an even more arduous task.

This is because, as we mentioned previously, rubber goods tend to be very thick. Additionally, they do not conduct heat efficiently.

This means that if you pour cold water over a burning rubber tire, for example, the fire directly touched by the water will be extinguished.

However, any flames the water cannot reach (on the inside of the tire, for instance) will continue to burn and will ultimately re-ignite the side you just put out. What you end up with is a never-ending cycle of reignition.

Another reason why burning rubber can be so dangerous despite its high flashpoint is that rubber begins to melt pretty much as soon as it starts to burn.

The result is molten rubber, which can inflict very severe burns. In fact, molten rubber has historically been used as a method of torture, which should tell you all you need to know about how dangerous it is.

Finally, the fumes produced by burning rubber can be highly toxic and even poisonous depending on whether the rubber is natural or synthetic.

The thick, dark smoke produced by burning rubber is bad enough in itself, exposing people in the vicinity to the serious effects of smoke inhalation.

However, some synthetic rubbers, when burnt, can release chemicals such as cyanide and carbon monoxide. Both of these substances are potentially deadly when inhaled in high enough quantities.

Basically, even though rubber might be a challenging material to set on fire, it’s definitely not worth taking risks because it’s also very difficult to put out and molten rubber and fumes can pose serious health risks.

To summarize what we’ve covered in today’s article:

Neither natural nor synthetic rubber is considered a flammable material in the technical sense because it has a flashpoint between 500 and 600 degrees Fahrenheit, which is approximately 4-500 degrees higher than the threshold for a material to be considered flammable.

However, if the above temperatures are reached, it is entirely possible to set rubber on fire. This can create a very dangerous situation because it’s extremely difficult to extinguish burning rubber, and the molten rubber and fumes created by the blaze can cause serious injury or even death.

The takeaway from this is that although you’ll have a hard time setting rubber materials and items ablaze, you definitely shouldn’t try it.

If you happen across some burning rubber, the best course of action is to distance yourself immediately to avoid breathing in the fumes and call your local fire department without delay.