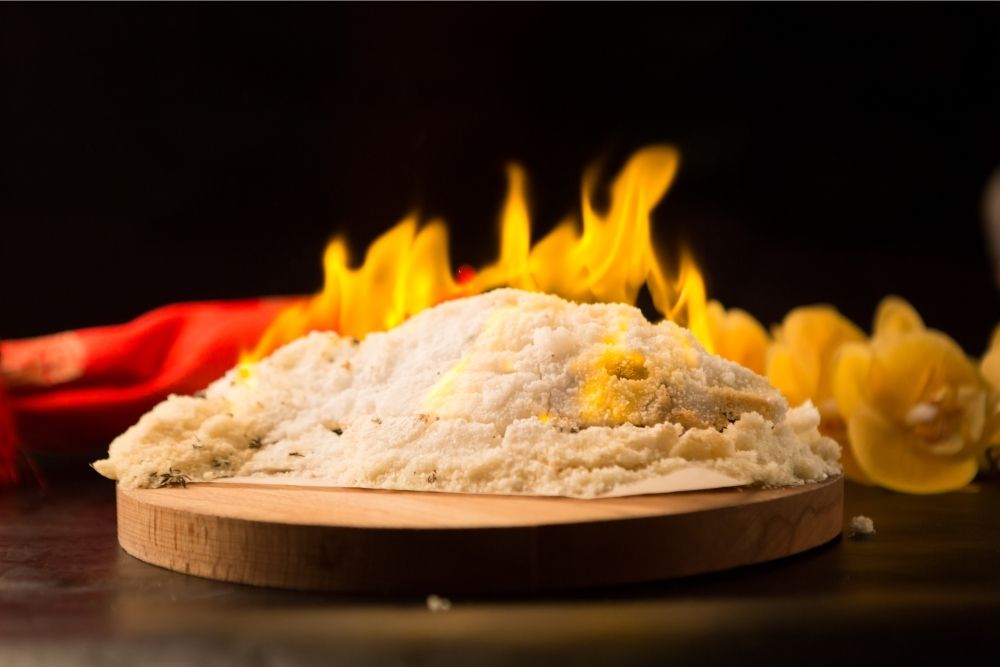 Salt is one of the most popular additions to home-cooked meals, dramatically improving the flavor of almost any food.

Whether it’s added to some boiling pasta water or sprinkled on top of a portion of chips, salt is a game changer. Furthermore, in the right quantities, it can also be important for your health.

But, despite its popularity, is salt flammable or a fire-risk? Should we give more care and thought to how we use and store it?

The simple answer is no, salt (sodium chloride) isn’t flammable and won’t easily catch fire. In fact, salt doesn’t even melt unless it reaches a temperature of 800℃.

This guide will take a further, more detailed look at the flammability of salt including its chemical make-up, what happens when you add it to a fire, and whether other variations of salt have a tendency to be flammable.

What exactly is salt?

From a chemical perspective, the term “salt” refers to any chemical compound that consists of both positively and negatively charged ions.

This chemical make-up subsequently produces an electrochemically neutral compound that holds no net charge on the surface.

However, for most people, “salt” usually refers to table salt or sodium chloride. This is a chemical compound of sodium and chlorine, and is often shortened to NaCl.

In this compound, the sodium is positively charged and the chlorine negatively charged. As a result, the overall compound is electrochemically neutral – therefore making table salt a salt in the chemical sense too.

In most circumstances, salt doesn’t catch fire because it requires incredibly high temperatures to ignite.

While it’s fair to point out that any substance can catch fire if you make it hot enough, it’s highly unlikely (in any normal situation) that salt will catch fire because of how highly chemically reactive sodium and chlorine are.

When the two form a bond, a considerable amount of energy is released. In order to break this bond, you’d need to supply a significant sum of energy (heat) – far more than you’d find in a typical household fire.

This comes as some relief, because if a fire were to reduce table salt (sodium chloride) to its constituent elements, it would burn quickly and easily, creating a major fire risk.

In order for salt to catch fire, it would need to get hotter still. Thankfully, you’ll never encounter any such temperature in ordinary life.

What happens if you add salt to a fire?

If you throw some salt into a fire, the color of the flame will change. This isn’t because the salt is burning, but because the heat of the flame changes the energy of salt’s electrons and this change subsequently produces photons of light. You’ll typically see a yellow flame when “burning” salt.

However, if you were to inspect the residue of your fire once it had been extinguished, you’d see that the salt wouldn’t have burned at all. Instead, it would be lying on the bottom, amongst the ashes of the burned materials.

You can even use salt to put out a fire due to the fact that it doesn’t burn. You may need a fair amount of it, but if you piled enough onto a fire, it would quickly smother the flame and remove any source of oxygen.

Seawater or saltwater isn’t flammable and won’t catch fire. In fact, it could even be used to effectively put out fires, the same as freshwater. The only reason it isn’t used for firefighting is because saltwater would likely rust and damage mechanical firefighting equipment.

Though, it’s worth noting that if you can make water hot enough to split into its two individual elements, hydrogen and oxygen, they are flammable. Again, it’s highly unlikely that you’ll ever see temperatures this hot in ordinary day-to-day life, and if you do, flammable water will be the least of your worries.

In terms of chemical makeup, pink salt or Himalayan Rock Salt is nearly identical to table salt, so therefore not flammable.

It contains a few extra minerals in trace amounts which are responsible for the salt’s pink hue, but these small additional quantities aren’t enough to significantly change its chemical properties.

Is it dangerous to heat salt?

In normal circumstances, heating salt isn’t dangerous at all. This is why it’s so commonly used while cooking. For example, you can add salt to water and boil it, without any problems.

Is salt ever explosive?

No, under all normal circumstances, salt isn’t explosive. If the temperature is hot enough to break down salt into sodium and chlorine, they may explode when they catch fire. This, however, isn’t anything to worry as temperatures need to be well over 1,000℃ for salt to be even remotely flammable.

No, the color of the flame when salt is exposed to heat tends to be yellow. This is due to the sodium in the salt which similarly burns with a yellow flame.

Again, rock salt isn’t flammable in the slightest. Moreover, the safety sheet for rock salt is clear that no special firefighting precautions are required when using rock salt.

There’s no significant risk of iodized salt becoming flammable. Iodized salt contains trace amounts of Iodine Chloride, which is equally difficult to break down into its two constituent elements.