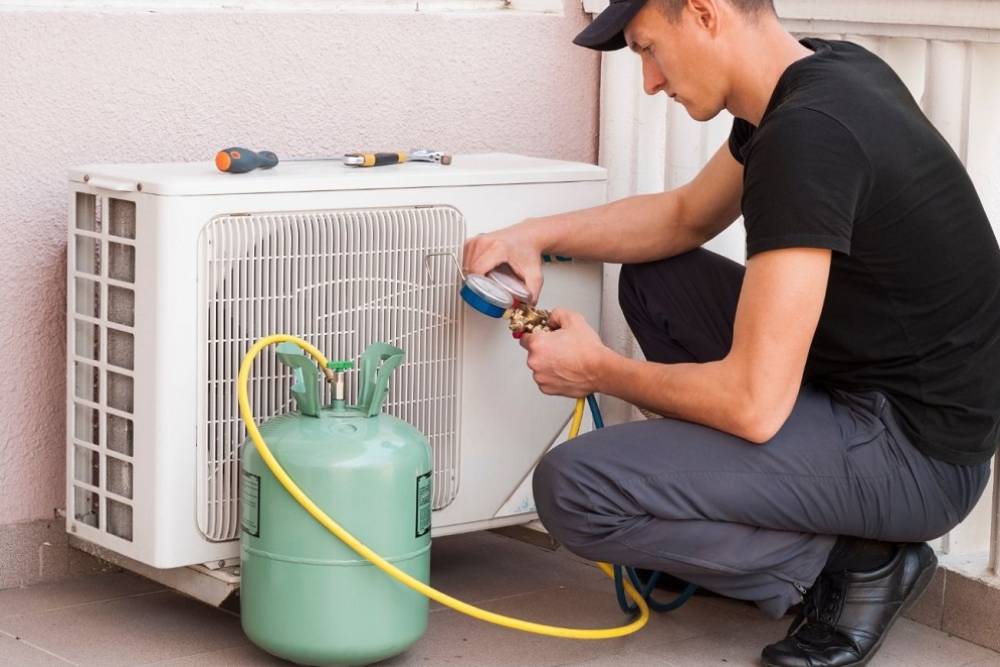 Freon is a brand name for refrigerant gases or liquids manufacturers by The Chemours Company.

Found in refrigerators, freezers, and air conditioning units, Freon is a chlorofluorocarbon (or CFC) that is gradually being phased out due to its harmful impact on the ozone layer.

But while Freon chemicals are stable and non-toxic they can become very dangerous in some situations. So, is Freon flammable?

Freon is nonflammable but can still cause explosions. If for instance, Freon is stored in pressurized containers and exposed to fire, air pressure changes can lead to vessels blowing up.

Detonations that involve Freon can result in fatalities due to the toxic gases created and released during the explosion.

Below, we’ll explain why Freon is not flammable, as well as what makes it explode. You’ll also find some fire safety tips and some alternatives to Freon.

Freon is a registered brand name for a series of refrigerant chemicals which are colorless, odorless, and extremely stable.

While Freon has now been discovered to be damaging to the ozone layer, it was in fact developed as an alternative to more dangerous refrigerants like ammonia.

But now many alternatives to Freon are being developed, and some are currently in circulation.

As we have mentioned, Freon is a trademark owned by The Chemours Company, but the name Freon can also apply to any of several halocarbon products used as refrigerants.

The Chemours Company sells in three main categories. These include fluoro products, like Freon and Teflon, as well titanium dioxide products and chemical solutions like cyanide.

Is Freon flammable or explosive?

Refrigerant chemicals are heavily regulated, with one of the factors regulated being flammability. All refrigerants’ flammability is thoroughly tested before products are available to buy, and are measured and labeled in three categories.

Freon products are non flammable at room temperature and are classed as A1. Any products labelled A1 have low flammability and low toxicity.

Two primary causes for Freon explosions are a change in air pressure and a source of ignition. Heat increases air pressure so the hotter the air is, the faster the molecules move, giving them a lot more energy.

High-energy molecules moving at fast speeds can frequently collide with the container and increase the pressure, making it more likely that the container will explode.

Freon is even more dangerous when exposed to flame or another source of ignition, releasing a deadly gas called phosgene. If you’ve never heard of phosgene before, it was used in chemical warfare and 85% of all lives in World War I were lost to phosgene. It causes pulmonary edema, which can be fatal.

If there is a fire involving Freon, use a dry extinguisher or a fire blanket. Fire blankets are beneficial as – unlike fire extinguishers – they won’t cause further damage to your property.

Freon leak detectors are also available, and some can alert you to refrigerant leaks in one second and give audible and visible warnings.

As always, stay safe and in an emergency call the relevant professionals like the fire service rather than attempting to handle the situation on your own.

How to keep Freon secure

Leak detectors are crucial to Freon safety, especially when you are storing industrial amounts of it.

However, for the average HVAC owner, as long as you have your system regularly serviced by a professional, you should have nothing to worry about.

Is Freon bad for the environment?

Freon is a CFC gas, so is a carbon-based product. When released into the atmosphere it can cause a lot of harm to the environment. In fact, CFCs are now illegal in most products because of the damage they do to the ozone layer.

While Freon’s stability is beneficial for the safety of people, it’s harmful from an environmental perspective. Some substances will react with other compounds or gases as they rise towards the stratosphere which prevents them from damaging the ozone layer. However, this does not happen with Freon and it reaches the stratosphere quickly.

The new R-410A refrigerants are categorized as A2L which means they are more toxic and have a higher flammability rating then Freon despite being better for the environment.

R-410A is more commonly known as Puron, and is considered an interim option while we move towards more environmentally friendly refrigerants.

For example, some Global Warming Potential (GWP) refrigerants like Solstice N41 and Dakin’s R-32 are in development at the moment.

How do refrigerants work?

Refrigerants have low boiling points, quickly turning them into vapor. This allows them to rapidly extract heat, and the refrigerant can then disperse that heat into the atmosphere.

Cooling systems such as a HVAC or freezer work in similar ways. The refrigerant is sucked into a compressor, increasing both the temperature and the pressure. Once the Freon vapor has been superheated it is sent into the condenser.

The role of the condenser is to emit the excess heat into the air and funnel the refrigerant into an evaporator. Evaporators are regulated by valves, and these control how much Freon can enter the evaporator at any time.

As Freon travels through the low-pressure environment of the evaporator, it is able to expand. This reduces pressure and temperature even more, and in the evaporator the refrigerant returns to a vapor state at room temperature.

Some appliances rely entirely on refrigerants, and so the only way to make them more environmentally friendly is to use greener chemicals. But there are several ways to cool a room without the use of a refrigerant.

These include the use of solar-powered fans, air coolers, bladeless fans, patio misters, and even bowls of ice. Or you can cool a room by keeping curtains closed during the day or adding greenery to your roof.

Now that we know if Freon is flammable, and what happens to Freon around an ignition source we can be reassured that Freon is relatively safe to use.

It has a low flammability rating, and Freon leak detectors are available for further peace of mind.

From an environmental perspective, there are alternatives to Freon that have less of an impact on the environment. However, these are slightly more flammable than Freon.

Hopefully as science advances there will be an alternative to Freon that is less damaging to both humans and our environment.