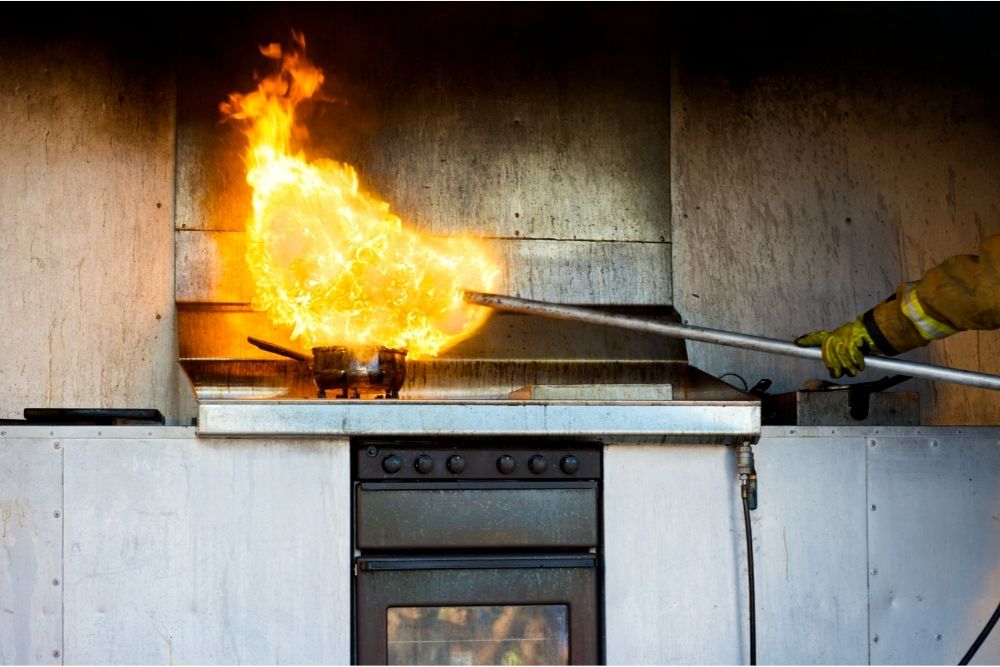 Countless TV shows and movies have depicted characters pouring oil all over something, flicking a lit cigarette or match onto it, and then watching on as it immediately ignites in a fury of flames.

But how true to life are these scenes? Is oil flammable? And, if it is, would it really spark a fire that quickly?

If you’ve ever found yourself asking any of these questions, you’ve come to the right place! Below, we’ll take a look at whether or not oil is flammable. We’ll also look at different types of oil and explain how to store oil as safely as possible.

Let’s cut straight to the chase. Believe it or not, certain oils (including engine oil) are not technically flammable. The reason for this is that they have a flashpoint above 302ºF (150ºC).

For any liquid, including oil, to be classed as flammable it has to have a flashpoint below 140ºF (60ºC).

However, there’s one important word above that needs to be taken into account; “Technically”.

The reason why certain oils aren’t technically flammable is because the vapors they produce won’t ignite at certain temperatures which, again, is where their flashpoint comes into play.

Put simply, if they are exposed to temperatures that fall below their flashpoint, they won’t catch fire.

What is a Flash Point?

To explain this a little better, let’s take a look at what a flashpoint is exactly. To put it in the simplest terms possible, the flashpoint of a flammable liquid is the lowest temperature that the vapors created by that liquid will ignite.

Flammable liquids will give off a certain level of vapor as the temperature increases and they start to become more and more gaseous.

Once enough vapors have been released, the chances of igniting become higher as there is a sufficient amount of vapor to catch fire.

In the case of most oils, temperatures have to get very high to start producing enough vapors to spark ignition, usually around 140ºF (60ºC). So, while throwing a lit match onto a pool of oil will usually create enough of a temperature, oil is unlikely to ignite if it’s simply being stored.

Of course, it’s still possible which is why it’s essential to store oil properly, but we’ll look at that in more detail later.

Different Types of Oil and Their Flash Points

One thing to keep in mind when looking at whether or not oil is flammable is that there are many different types of oil. Each of these also comes with its own flashpoint which means that, while none are technically flammable, some have a lower flash point than others.

To give you a better idea of how flammable different types of oil are, we’ll take a look at their flashpoints below. We’ll also explain how to store them safely so that there is less chance of them igniting.

Petrol is one of the most flammable oils as it has a flashpoint of just -45.4ºF (-43ºC). For this reason, it needs to be stored extremely carefully and, ideally, in metal containers. Make sure that it’s in a building that is far away from your main residence or building and keep it locked in a chemical storage container.

When transferring petrol from a container to a vehicle, lawnmower, or anything else you need it for, make sure that you always do it in an outdoor space. This allows the fire-causing vapors to escape into the air and, as such, reduces the risk of them igniting.

Acetone also has a very low flash point of just -4ºF (-20ºC). When stored above this temperature, it can take just 2.5% of acetone vapors in the air to cause an explosion! So, with this in mind, it needs to be stored in a temperature-controlled environment.

Acetone should always be stored in metal or glass containers, or in plastic made from LDPE (Low Density Polyethylene).

Benzene is another oil with a fairly low flash point, and it can start to produce enough fire-causing vapors at just 10.4ºF (-12ºC). For this reason, it should be stored in a cool, dry area that is well ventilated.

Incorrect storage of benzene comes with other issues, too. The inhalation of benzene fumes has been linked to certain blood conditions including leukemia and anemia, so make sure it’s stored in a well-ventilated place and avoid prolonged exposure.

Ethanol is the first example of an oil that has a flashpoint close to room temperature, and it starts to produce a high level of vapors at 61ºF (16ºC). With this in mind, it’s important to keep ethanol stored in a cool, dry place where it’s unable to get to this temperature.

It should also be stored in a well-ventilated space so any vapors that do escape can be carried into the open air.

Kerosene has a flashpoint of 100ºF (38ºC), which means it sits on the border of the flammable fuel boundary. Keeping in mind that its flashpoint is the lowest temperature at which it can be considered flammable, there is a little more leniency over how it can be stored. However, your safest bet would be to keep it in a cool, well-ventilated place.

Diesel has a variable flashpoint ranging from 125ºF (52ºC) to 204ºF (96ºC), and this means that it is considered non-flammable in most environments. For example, the temperature inside your home or your shed is unlikely to exceed 125ºF.

However, as with all oil, it still requires careful storage. Even though it has a high flash point, it’s best to keep it in a cool, well-ventilated place. It should also be labeled clearly to stop it from being mistaken for another type of oil.

So, is oil flammable? The true answer is yes and no. While it’s not technically considered a flammable liquid, oil does have a flashpoint which, if met, enough flammable vapors can be released to start a fire. To make things even more difficult, different oils have different flashpoints.

In the case of whether a lit match of a cigarette would start an immediate fire, the answer to this would be yes, definitely. A lit match burns with a temperature of around 1472ºF (800ºC) and there is no oil that has a flashpoint higher than this. But, if stored at home, certain oils may ignite if their flashpoint is exceeded. This is why they should be stored with extreme care.