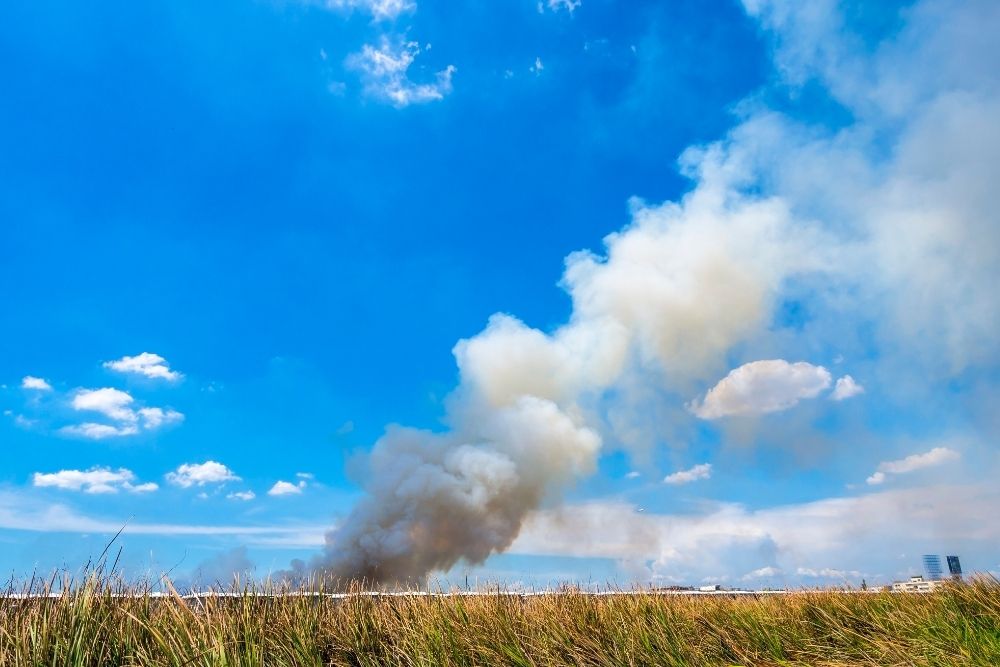 Although smoke is highly dangerous, the color of smoke can help firefighters determine the source of the fire and potentially predict how the fire behaves next.

When called to the scene of a fire, usually the Officer in charge of the scene will use the smoke color, density, speed and volume to locate the source and intensity of the fire.

Reading smoke is a skill that has been used in the fire service for a long time, as having an ability to understand how smoke is behaving can be the difference between life and death.

Smoke is the byproduct of fuel combustion. Most fires involve carbonaceous (organic materials that contain large amounts of carbon content) fuels. Examples of this include wood, paper, plastics, petroleum or textiles.

When these fuels do not burn completely, they undergo what is called an ‘incomplete combustion’. This means there isn’t enough oxygen in the air to produce carbon dioxide and water, so the ‘free carbon’ appears as smoke.

As smoke is fuel, made up from gases and particles, being able to read smoke colors is a significant skill for fighting fire. Observing how the smoke behaves can be a way of telling whether you have seconds or minutes before something happens.

How smoke appears is dependent on the type of fuel that’s combusting and how hot it’s burning. During a typical house fire, hundreds of different chemicals and fumes are combusting – which can be more dangerous than the fire itself.

Whilst flames immediately draw our attention, flames are at the end of their potential. It is smoke that is the biggest tell-tale sign of danger.

Most fires will produce a mixture of black, gray, and almost white smoke because of the variety of fuels and the gases in the air. However, firefighters don’t just look out for the color, but the thickness of the smoke.

The thicker the smoke, the more explosive it can become.

White smoke is an indication that a fire is creating moisture and water vapor, as it usually suggests that the fire is in the initial stages of heating an object and the moisture is being drawn out.

So, if smoke is white, it can indicate that a fire has just started to burn, as it has yet to come into contact with any other products/materials.

White smoke can also be a sign of light fuels combusting, such as hay, grass and twigs.

In comparison to white smoke, black smoke tends to be a bigger cause of concern. A general rule of thumb is that the darker the smoke, the more volatile the fire is. Fires that produce black smoke tend to be larger and cause greater destruction.

Black smoke indicates that heavy fuels are not being fully consumed. This is an example of incomplete combustion.

When the supply of oxygen is poor, but water is still being produced the “free carbon” that has not yet combusted reacts with the water in the atmosphere.

So instead of carbon dioxide production, the fire is now producing carbon monoxide. It can be extremely dangerous to inhale carbon monoxide, as prolonged exposure can result in death.

Whereas brown smoke can be an indication of natural materials burning, black smoke indicates man-made materials are ablaze. These can include tires, vehicles, rubber and synthetic building materials.

Additionally, fires that emit large quantities of black, rolling smoke can be a sign that petroleum products are involved.

Black smoke also occurs during electrical fires, but there is usually a strong smell of burning wires that accompany the smoke.

Gray smoke differs from white/black as it tends to indicate that a fire has generally run its course, and is struggling to continue burning materials effectively. Smoke from burning plastics or painted surfaces can also appear gray in color.

However, it’s important to note that some black smokes can appear gray if it is mixed with moisture from other heated materials (mixes with white smoke) – so it’s not always a sign to relax.

Brown smoke is usually indicative of untreated wood burning. This could signal that in the event of a building fire, the fire has grown from being a room and contents type to a structural event.

For instance, the rafters of the building have caught fire, which could mean that structural collapse could be imminent.

Blue smoke is almost always exclusive to vehicles. If blue smoke is emitted from an exhaust piper, it usually indicates that there is an oil leak in the engine.

If an engine valve seal is broken, it means that oil has leaked into the combustion chamber where it is burning along with the fuel.

Additionally, some structural fires can look blue, depending on how the light reflects on the smoke.

If smoke appears blue, it’s usually because the smoke is set against a dark background (i.e. night time). Similarly, during the day time smoke can adopt an orange color – this is just another example of how light can affect the appearance of smoke colors.

The general advice is that you should treat all smoke as potentially harmful, regardless of the color it produces. It’s also worth noting that most deaths that occur during a building fire are the result of smoke inhalation and not from being burnt.