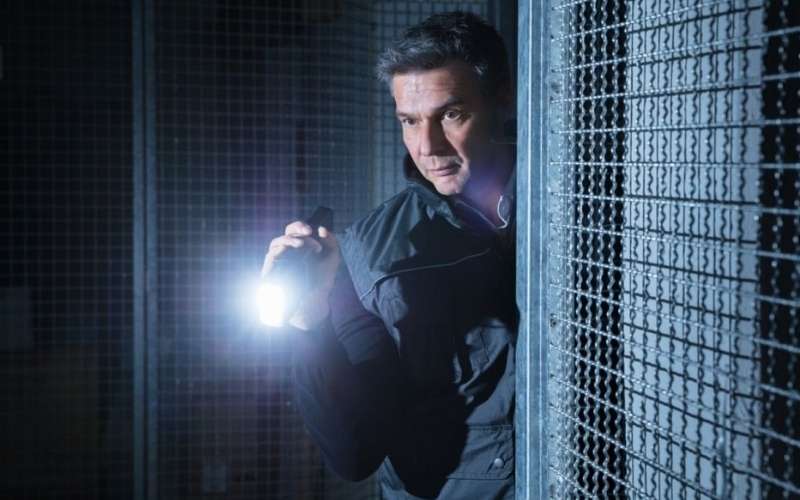 There are few things worse than turning up to help out at an emergency situation in the dead of night and not being able to see clearly.

But there is one thing that’s definitely much worse – turning up at an emergency situation only to have your torch cause a spark or ignition of any chemicals or gases in the area.

We’re pleased to report that there is a solution, however. You can invest in a top quality intrinsically safe flashlight that’s explosion-proof and certified as being safe to use in hazardous environments.

Better still, we’ve been checking out some of the best intrinsically safe flashlights out on the market today. After much deliberation, we were able to handpick a shortlist of our top few favorites to review for you today. And that’s coming up very shortly.

But we definitely get that choosing one can be tricky, so we’ve also put together a handy buying guide that will walk you through all the key things to think about before you buy.

Then we’re going to top that off with a section where we tackle some of your most frequently asked questions on the subject.

So, without further ado…

In a hurry? Why not check out our number one pick? 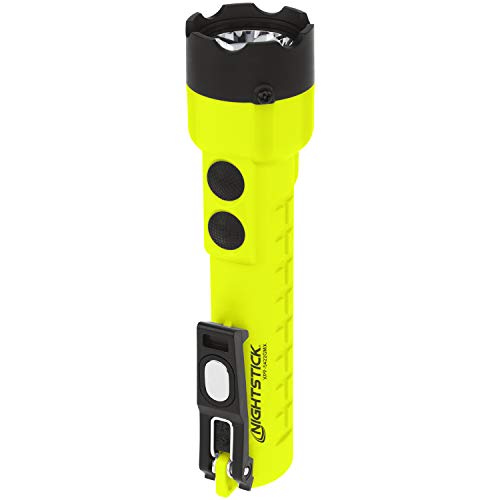 Now, this is a flashlight that’s gone down super well with those who’ve bought it and tried it out…

It also happens to be the winner of the title “Amazon’s Choice” in the category of “Intrinsically safe flashlights”. Such a title is only given to products that are both of excellent quality and are available at a good and reasonable price.

It’s got a dual light system, which basically means that not only do you get a floodlight at your feet, so you can see where you tread, but you also get a more focused beam to examine things up close. The floodlight is set at 130 lumens.

The more focused beam meanwhile uses a 210 lumens LED in conjunction with a high-efficiency deep parabolic reflector to produce a beam that can stretch a whopping 187 meters into the distance.

You can use both of these lights at the same time if you so wish, though this will mean less lumens of light thrown out.

It runs on three AA batteries, which you can pick up just about anywhere.

It’s worldwide certified as intrinsically safe (by cETLus, ATEX, IECEx and INMETRO) and will never cause a spark or an ignition of gas or chemicals.

It has a clip to keep it on your belt or your shirt until you need to hold it, and it also features magnets, so if you’re on a metal ladder, you can prevent the flashlight from falling.

It can be operated entirely one-handed, leaving your best hand free, and features a good, non-slip grip. And it has a water resistance rating of IP67, which means it can take being momentarily dropped in a puddle of water.

And the housing of the gadget is in a bright, highly visible color, yellow, that’s easy to spot, even in low light conditions.

The other thing we love about this flashlight is that it’s backed by a limited lifetime warranty – so reassuring.

Amazon occasionally has deals on this particular flashlight – simply click on “Check price” to see if there’s a deal on now. 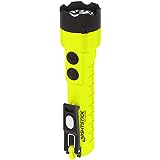 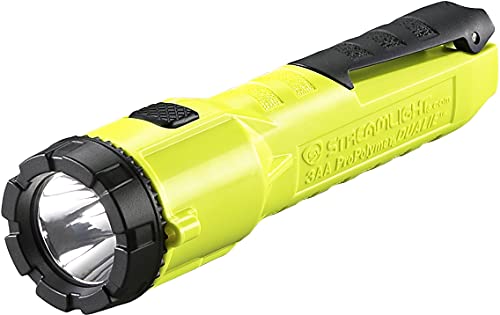 Wow – talk about flying off the shelves!

Over one thousand people have bought this flashlight on Amazon alone, judging by the ratings. Better yet, the average Amazon customer rating still comes in at a whopping full 5 stars. And looking into it, we can see why customers love it so much…

It features two beams of light rather than just one. And you can either run them simultaneously or on their own. Having both beams on is the best protection from trips and falls.

The floodlight offers 140 lumens of light and has a modest but bright beam distance of 18 meters. The spotlight also offers 140 lumens, but this light is more focused, and can shine up to a whopping 171 meters into the distance.

It’s Class 1 Div 1 Rated, which means it’s safe to use in just about every environment, including some of the more hazardous ones.

It features a stipple texture for a good, secure grip, and you can still grip it just as easily when wearing gloves. It has a rugged build that is both corrosion proof and scratch resistant.

There’s a handy clip for your jacket pocket, so you can use it completely hands-free. But when in storage, the clip lies flush with the grip, so it won’t snag on your gear, and there’s less chance of the clip getting broken off.

It’s powered by AA batteries, which you can pick up anywhere. And on a full charge, either beam will last a whopping 18 hours at a time. And if you have both beams on, it will last for 9 hours.

It has a water resistance rating of IP67, which means it can easily handle getting caught in the rain.

It’s available in black, or in a highly visible yellow, which is what we would recommend. And you can buy it either with or without batteries included.

And if all that’s not enough, it also happens to be available at a very reasonable and affordable price, too. 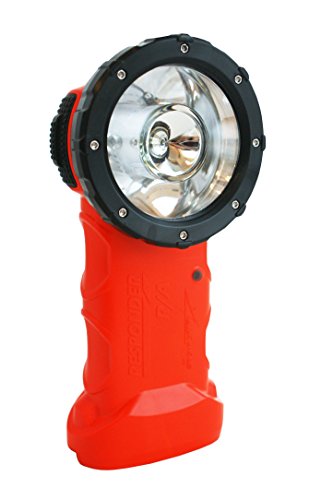 Sure, volunteer firefighters are meant to be fully equipped when they arrive at an emergency situation. But they’re usually left with second hand items that have already seen their fair share of use.

And you may feel much more confident about attending an emergency situation if you were to buy your own flashlight.

This flashlight is aimed at those attending rescue situations and emergencies. Rather than having to hold this flashlight with your hands, it’s designed to be strapped to your uniform, allowing a strong light to be projected outwards for you, leaving you with both hands free, which is exactly what you need in an emergency situation.

We were impressed by just how much light is thrown out of this flashlight – a whopping 220 lumens.

But even better than that is just how far into the distance this flashlight will light up – a staggering 477 meters. That’s significantly further than the other flashlights that made our shortlist. And it can really cut through smoke and haze.

It’s intrinsically safe, with UL 913 certified technology that complies with UL Class I, Division 1-3 protection methods. Which means that there’s a significantly reduced risk of the flashlight causing an explosion in a hazardous area.

You can power it with 6 regular AA batteries, or if you don’t want to have to keep buying batteries, you could use rechargeable AA batteries.

It’s a very tough and rugged flashlight that’s able to take drops from up to 30 feet. And it can handle the rain too, with an IP rating of IP67.

This is a more expensive flashlight than many of the others in our shortlist, but it’s much brighter, and it can provide a much better visual in the far distance.

Were you hoping to find the best intrinsically safe flashlight that’s rechargeable? Because such flashlights are very hard to come by. But here we have a flashlight that is exactly that.

Unfortunately, however, it does cost a lot more than the ones powered by AA batteries. But it has been met with excellent customer feedback and ratings, which suggests that the majority of those who’ve bought it deem it good value for money all the same.

It has 3 different brightness modes, namely high, medium and low. The high beam offers 140 lumens of light, and has a run time of 4 hours on a full charge. If you want to preserve the charge, however, you can switch to the low mode, which offers 50 lumens of light but has a runtime of up to 12 hours.

It has a tough and rugged design, with enough impact resistance to be able to take a drop, and enough water resistance to handle the rain, with a water resistance rating coming in at IPX4. It’s also non-conductive and features both chemical and corrosion resistance, and is specially designed to be safe even in hazardous areas. 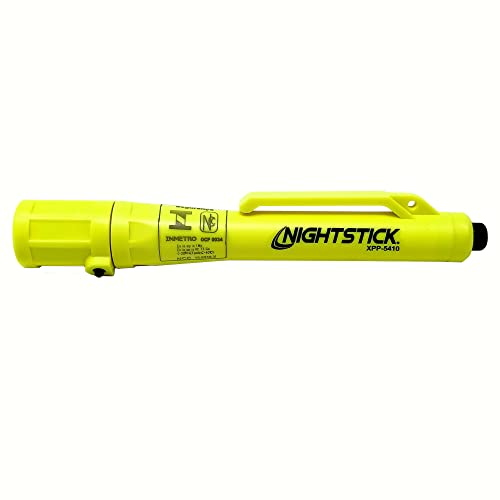 It comes from one of the top brands in the industry and has been met with excellent customer feedback. On Amazon, for example, it has earned an average customer rating of 4 and a half stars out of 5.

As a penlight, it has been deliberately made to take up less space than a regular flashlight, so is more convenient for storage. Unfortunately, however, it’s not as bright as a regular flashlight, only throwing out 30 lumens of light. However, that might not be such a bad thing, because it could help to preserve your night vision, which you will need if the batteries were to run out.

It’s powered by 2 AA batteries, which come included in the price, and can run for a whopping 18 hours on a full charge.

And despite the relatively low number of lumens, it can still light up to a distance of 40 meters.

It is Cetus, ATEX & Ice listed Intrinsically Safe for use in hazardous locations where explosive gases may be present. 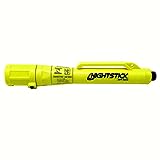 As promised, here’s your buying guide. It will walk you through all the key things to think about before you buy.

You can rest assured that all of the flashlights that made our shortlist are all intrinsically safe. And what that means essentially is that they will never cause a spark or ignition of gas or chemicals and are explosion-proof.

You need your flashlight to have a convenient power source. Flashlights powered by AA or AAA batteries can be very convenient because you can pick up such batteries just about anywhere, including the corner store.

But that’s not your only option, and you can also get intrinsically safe flashlights that are rechargeable, and come with their own USB charging lead. If you decide to go for this type of flashlight, you might want to look out for one that has a low power indicator, so that you can see at a glance whether it needs to be recharged.

Can be used on-handed or hands free

Some of the flashlights that made our shortlist feature two lights, a floodlight to see where you’re walking, and a more focused beam to see into the distance. Something you might want to consider.

You never really know when it’s going to rain, and if you do end up being caught in the rain, you want your flashlight to continue to work unimpeded. So to that end you need to invest in a flashlight that’s sufficiently water resistant, with a good, high IP rating.

When it comes to intrinsically safe flashlights, there are two brands that simply outshine the others (pun intended).

These include the likes of Nightstick and BrightStar, and we were sure to include these in our shortlist, but on their own merit.

Nightstick and Brightstar also seem to get better customer ratings and reviews than most other brands, so it was a no-brainer to include them.

You’ll be surprised at just how much the best intrinsically safe flashlights can vary in price. You can get some for as little as $22, while at the opposite end of the scale, there are ones that can cost as much as $200, sometimes more.

So, we would strongly advise you to check prices as you go along and learn what your money can buy you. That way, you can make a good, well-informed decision about how much your budget should be.

What makes something intrinsically safe?

Here is the definition of what is meant by intrinsically safe equipment:

“Equipment and wiring which is incapable of releasing sufficient electrical or thermal energy under normal or abnormal conditions to cause ignition of a specific hazardous atmospheric mixture in its most easily ignited concentration.”