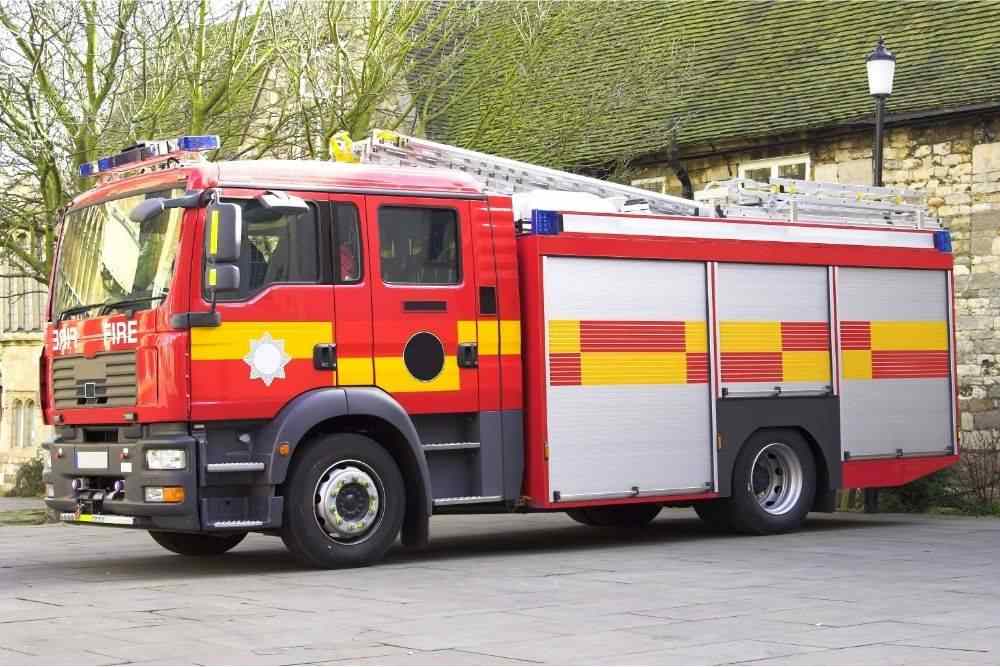 Firefighters go where they’re needed, sometimes ignoring the dangers even when no one is inside a burning building to be saved – Bill Dedman

When the world around you is consumed in a raging inferno, the familiar wail of a fire engine can be the most welcome sound you’ll ever hear. But is that siren heralding the approach of your rescue that of a fire engine or a fire truck?

While most of us assume that they’re one and the same, fire trucks and fire engines have vastly different roles and depending on the severity of, and the threat that a fire poses to life and property, either or both of the vehicles may be required to attend, and help extinguish a blaze.

In order to better explain what both vehicles do, and the differences between them, we’re going to take a closer look at what fire trucks and fire engines and their crews do.

And even though they look the same to the untrained eye, with our guidance you’ll soon be able to tell which is which and know exactly what it is that they’re charging off to do.

The Fire Engine – What It Is And What It Does 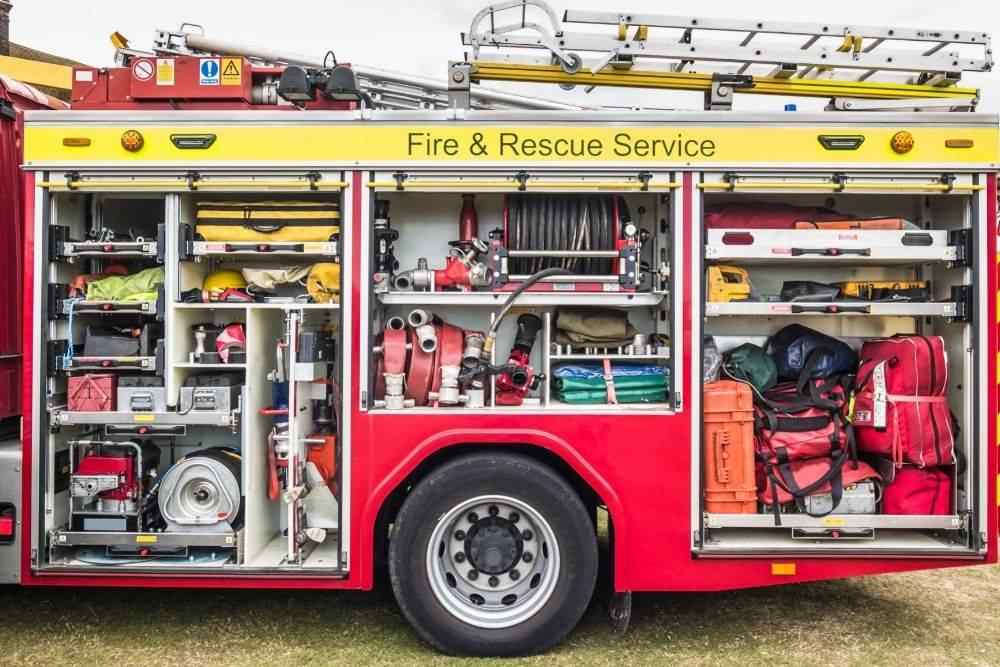 A fire engine, regardless of the fire department that it belongs to, is usually a long, red juggernaut that carries a firefighting crew and the equipment they need to combat, and put out a fire, to wherever it is they need to go.

The main role of a fire engine and its crew is to put out and fight a fire, which is why engines are fitted with hoses, nozzles, a pump, and an onboard water tank.

All fire engines are also fitted with onboard radios so that their crews will know exactly what they’re about to face as the picture becomes clearer, can summon any required help, and keep their base of operations informed about exactly what’s going on.

One of the strangest facts about fire engines is that they’re actually commercial vehicles, and it’s perfectly legal for a private citizen to own and drive one provided they don’t use, or sound the siren or operate it under the pretext that it is being used as an emergency vehicle.

The Fire Truck – What It Is And What It Does 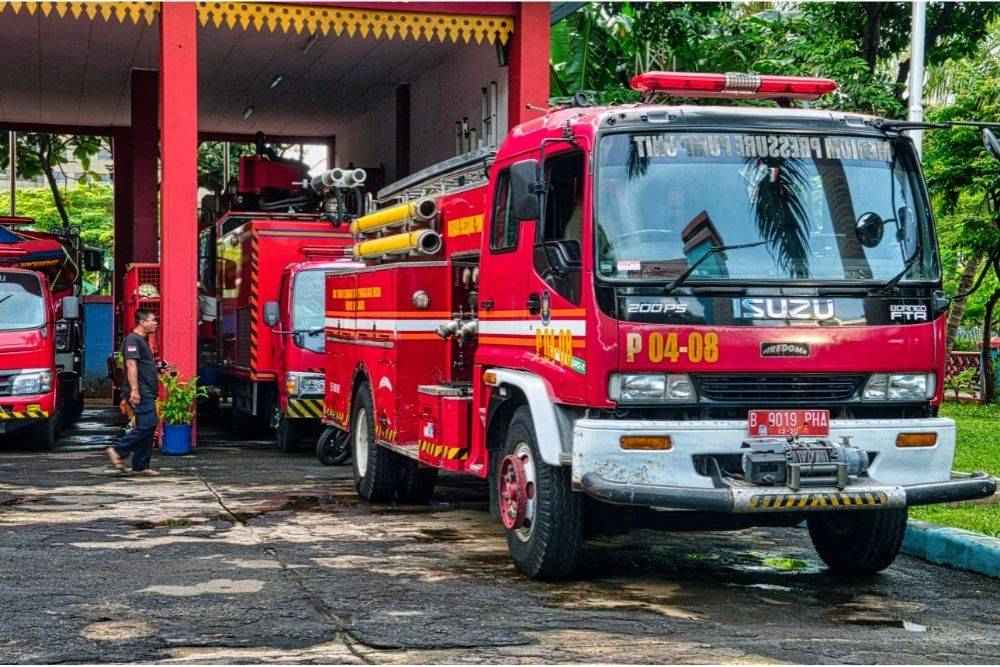 At first glance, it’s easy to mistake a fire engine for a fire truck, but if you know what you’re looking for, you’ll be able to tell the difference almost straight away, even though they’re almost always painted with the same livery.

And the main differences between a truck and an engine are that the former doesn’t carry any hoses and doesn’t have an onboard water tank while the latter doesn’t have, or carry a ladder on its roof or sides.

A fire truck has one simple purpose. It’s there to transport its crew to the scene of a fire so that they can rescue, and save the lives of, anyone who might be caught, or trapped in that fire.

The truck carries all the equipment that its crew needs to break into, and evacuate any burning buildings, and while their primary role is to save lives, the crew of a fire truck is also there to serve as back-up to the crew of a fire engine, should they require, or need any assistance.

Truck Or An Engine – What’s The Difference?

So, now you know the role that each vehicle plays in fighting a fire and rescuing the victims caught up in it, it’s time to look at the things that differentiate and separate both vehicles.

It’s there to bring the fire under control so that the crew of a fire truck can venture into the inferno and rescue anyone trapped inside, and will always remain on site until the fire is finally extinguished, no matter how long that takes.

In Harm’s Way –  While it won’t arrive before its bulkier sibling, a fire truck will never be far behind and serves as the transport for the men and women whose job it is to put their lives on the line in order to save the lives of others.

It’s a rapid response vehicle that carries all the equipment that its crew needs to plunge into all sorts of nightmare scenarios to rescue whoever needs to be saved.

Apart from the ladders and the hoses, the easiest way to tell them apart is by which of them arrives first and begins to drown a fire and which of them carries the crew that plunges headlong into the fire to pull everyone out.

There isn’t any fire-related incident that doesn’t require the presence of a fire engine, but there are times when a  fire truck isn’t needed.

Any fire that poses absolutely no threat to human life and only needs to be extinguished, doesn’t need a fire truck to be present, as the fire engine can successfully deal with, and put out a fire by itself.

However, if there is an immediate threat to life or the fire in question might jeopardize lives, then a fire truck with a fully trained crew needs to join a fire engine at the site of the fire and continually assess the situation as it unfolds before it’s crew are sent in to do what they do best. That is, to save lives and rescue people.

The Final Truck And Engine Word

They may wear the same colors and look alike, but fire trucks and fire engines are far from the same.

And now you know what they do, and what the differences between them are, you’ll almost certainly have a much deeper, and far more profound respect for the men and women who ride in them.

Read next: 20 Best Fire Trucks in the World